The Quickest Steak I Can Make 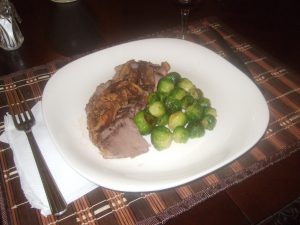 The quickest steak I can make is a Flank Steak.

This is one of my favorite cuts of beef because it's very lean, tender, flavorful and considerably cheaper than many other cuts. 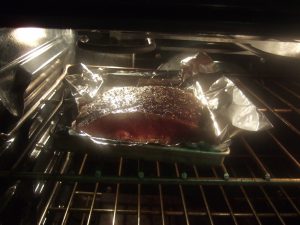 Broil The Steak As Close To the Heat As Possible

This steak is from my local farmers market and weighs almost 2 pounds!  (That's a fat cow).

Since I'm only cooking for two, I've cut the steak into two-15 ounce pieces.

It's thinly coated with olive oil, salt, and pepper and cooked to 135F internal temperature, medium/rare. 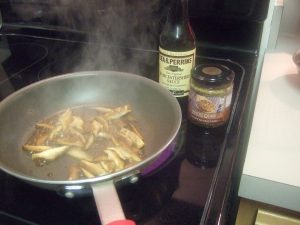 I've sliced some farmers-market Shitake mushrooms and sauteed them in butter until they give off moisture.

Then, deglaze the pan with Worchestershire sauce and add a small amount of whole grain mustard. 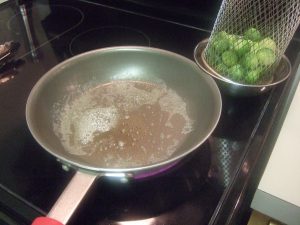 Heat Butter Until It Browns

Normally when I saute with butter, I want to prevent it from browning.

However, for this dish I want the toasty-ness of brown butter so I'll keep cooking until it browns but doesn't smoke. 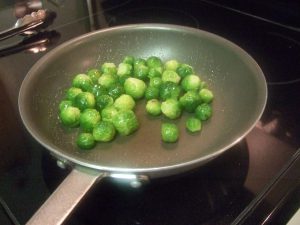 Previously steamed Brussels Sprouts are added to the pan to re-warm and caramelize slightly.

The sprouts are already cooked, they just need to have some color added to them.

Often, I'll add toasted almonds to this dish but I don't have any today.

This entire dish took less than 20 minutes to prepare, and is a hearty winter dinner.

There were few knife skills needed, I just had to peel Brussels sprouts and slice mushrooms.

I used a basic saute method on both items and simply broiled a salt and pepper steak.

What would you add to this dish?  Does it need potatoes or rice?

Please comment below on how you would improve this simple dish.