The 7 Reasons Women LOVE a Man That Can Cook

“Thanks Chef Todd, your cooking lessons got me laid last night” is an actual comment I received from one of my students. It’s not one of the promises I normally make when men become members of my online cooking classes, but I’m sure it happens all the time.

Women LOVE a man that can cook. It tells her a lot about what kind of man he is. Men think becoming a rock star gets all the girls, I’ll tell you that a great cook IS a rock star in the kitchen, and learning to cook is much easier than playing guitar.

Whether you’re new to the dating world, returning to it after a broken relationship, or want to demonstrate your years of admiration for your wife, being a maestro in the kitchen will have a greater impact on the opposite sex than dozens of roses ever will.

When you’re a man who cooks, you tell women that you’re: 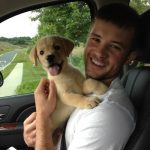 1) Sensitive – Men that cook show they’re in touch with the subtleties of the romance surrounding preparing a meal for someone else. It’s a gift you give when you take the time and effort to offer someone else nourishment and fulfillment during one-on-one time together. If you’ve used the ingredients she loves, or cooked for her specific diet, you’ve shown you are already interested in the things important to her.

2) Creative – Women love artistic men, those that can express themselves through art, music, literature, or culinary endeavors. Whether it’s the inspiration to plate interesting meals every night for your wife, or the second-date thrill she’ll experience at seeing what you can improvise, you’ll prove that you’re a creative guy with an artistic streak.

3) Successful – The success of your cooking skills shows that you can bring a project and presentation to fruition. She’ll be attracted to a man that can plan a menu, gather the best ingredients, coordinate the timing of the cooking, and present a visually appealing plate. This is a guy that’s dependable, that sticks with something that makes the entire relationship more enjoyable for both of you. 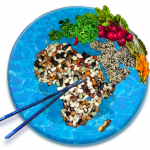 4) Worldly – If your food habits consist entirely of Mac and Cheese, Chinese food and pizza, you haven’t traveled very far from the middle school lunch room and she’ll recognize this. When you learn to cook, you can gather ingredients from all over the world and speak articulately about why you chose them for your meal together. You’re aware of the global food scene and that makes you well traveled, whether you leave the kitchen or not.

5) Generous – Women may complain that men don’t “give of themselves”. You can stop that thought immediately when you give of your time and cooking skills to make her happy. If you think picking up the $150 check at the restaurant makes a man generous, you’re wrong. Most women expect that you’ll be paying for dinner. But, MAKE dinner and you’ve really given something that can jump start a relationship.

6) Multi-Dimensional – A man that can cook is interesting to women. “How did he do that, where did he learn that, how does he know?” And perhaps even more impactful to a relationship is the question in her head that remains, “what else does he know how to do?” Men can create a curiosity about themselves in her mind which leads to wanting to get to know them better.

7) Skilled With Your Hands – When you cook for a date, she’ll definitely be impressed when dinner is all laid out for her upon arrival for the reasons stated above. However, if part of your romantic time together included the ACT of cooking she can see how dexterous you. Flash those knife skills, deglaze that pan with flambe’ because each kitchen skill you show just makes her wonder what else you can accomplish.

The man that can cook instantly demonstrates sentiments that many can’t vocalize. Men aren’t good with words and poetic sentences, but they ARE good at cooking. I’ve had hundreds of men in my online cooking courses and they are always the best students. I find that men want to know the HOWs and WHYs of cooking, they want to figure it out.

Male cooks don’t like following recipes. Have you ever known a man that WANTS to ask for directions? No, they want to solve the problem for themselves, not just follow a list of tasks. That’s why the best approach for them to learn to cook is concentrating on the basic methods behind cooking, experimenting with what works and repeating successes to arrive at the basic cooking skills everyone should have.

A few basic cooking skills will attract more women than all the flowers and greeting cards a man can gather, it says so much more about them.

Join my FREE online Web Class to discover my exact process for creating a “soup to nuts” romantic meal at home using Aphrodisiac foods (and I promise, it’s easier than you ever imagined) Click Here now. 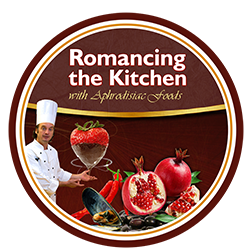